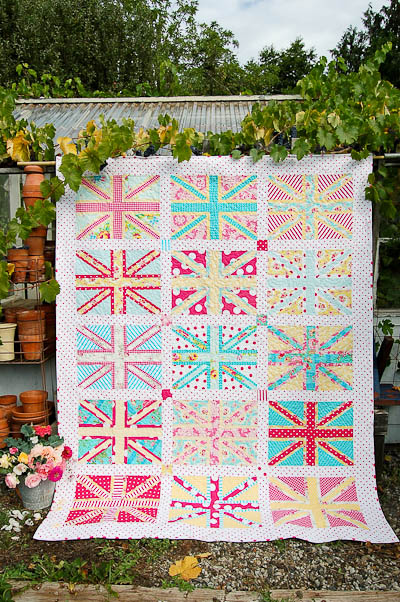 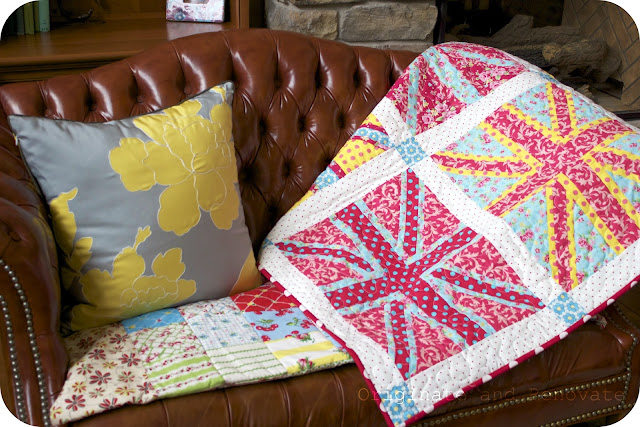 Being half-british myself, this pattern was love at first sight.  It uses a template at one point, which I'm usually not a fan of, but I was pleasantly surprised at the simplicity of putting these blocks together. I made the baby version, which is only six blocks and planned to hang it on my wall, but when my sister-in-law (who lived in London and Wales for a few years) announced she was having a baby girl, how could I resist?  I will admit, after binding it, it was really hard to give away. Thankfully it was easy enough to make, and I plan to whip up another for myself and maybe even a few pillows from some extra union jack blocks.  I would most definitely recommend this pattern.
Linking Here
Pin It
Posted by Annie @ Originate and Renovate at 4:42 AM

I really like that pattern even though I have never even been to England!

That is just gorgeous...I LOVE the colors! I've always wanted to learn how to quilt!

Your quilt is really pretty and i love your fabric choices :o)

Saw your link over at The Gunny Sack. This quilt is gorgeous!! Love the design and the colors you chose. Beautiful. I am pinning this for future quilting inspiration :)

Gorgeous! I need to get my hands on this pattern! Thanks for sharing :)

FMQing mine right now - I had to start out with the big version though! I too loved how quickly these blocks came together.

Your quilt turned out so well - one lucky baby girl!

I have made this patten twice, both for English exchange students we have had. It was fun to make and they love their quilts!

thanks for the review- I shy away from template patterns but I am glad to know this is worth it.

That quilt is just gorgeous!! What a lucky sister-in-law!!


Thanks for linking to a Round Tuit!
Hope you have a fabulous week!
Jill @ Creating my way to Success
http://www.jembellish.blogspot.com/

Love the pattern, your fabric selection, and England! I saw your link on Quilt Story.

Gorgeous!! Hope you can link this up at my turquoise lovin' party!! http://www.sweetlittlegals.com

The quilt is stunningly beautiful! I have added the pattern on my wishlist and will have to get it soon. Thank you. :)

Such a pretty quilt. I love the colors.

So pretty!! I love the colors and patterns!

We're just starting a link up party and love it if you'd share there (if you are interested): http://www.waywardgirlscrafts.com/2012/03/wayward-weekend-week-6.html